skip to main | skip to sidebar

Rodger spends the entire set drinking a case of Red Stripe.
"Y'all girls want some pills?"

Rodger says when it is time to go:"I can barely walk, who wants to ride back with me?"

We're off to the west coast with killer shows in store. See you there!
Posted by Noisebloid at 2:20 PM 11 comments: 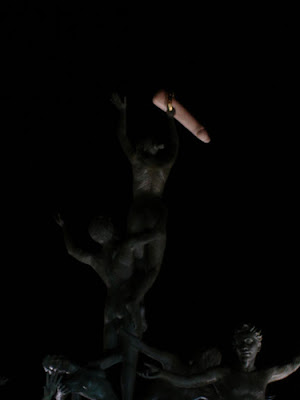 Posted by Noisebloid at 2:08 PM No comments:

Word on the street is TuTu & Poodle are moving in together and just may be engaged. Both were unavailable for comment at press time and TuTu's rep refused to comment. Will TuTu wear this hot wedding gown designed by Granny Square(Angelina Messina)?

Posted by Noisebloid at 1:38 PM No comments:

Rumor has it Iovae once asked Jessica Rylan for her hand in marriage. She declined. How could she turn down such an Ohio hottie?

Posted by Noisebloid at 3:19 PM No comments:

An anonymous tip-off to Noisebloid suggests that Dominick Fernow (Prurient) has been partying hard and looking for lovely ladies after his shows.

I am sure if this news if true, it will make all the ladies very happy!
Posted by Noisebloid at 2:47 PM 3 comments:

At the International Noise Conference this past February a very mysterious pair of panties sunbathed on the hood of a car all weekend. But whose panties were they? An anoynmous tip to Noisebloid claims they were Nashville's favorite vandal/artist and DIB member, Kate Kuss. Kuss was unavailable for comment at press time.

Posted by Noisebloid at 10:56 AM No comments:

Posted by Noisebloid at 10:20 AM No comments:

Apparantly recently outted Zac Davis is a Nazi as well?

"...never trust closet stories from a dude decked out in a "HIV +" shirt and who is tears down his "White Power" sign as soon as someone axes about it..... " John Olson on HN_AM board

Posted by Noisebloid at 9:57 AM No comments:

"it's pretty weird john olson is saying it in such a gossipy way..
while on tour with wolf eyes in europe me and john shared a room a few
times..
the first night john came in all sweating in his brown underpants saying,
"dennis i need to take a shower", i said ok and kept reading a circuit
bending magazine, when i looked up about 30 seconds later john was still
standing at the same place with that same weird look in his eyes.., i
neglected it and kept reading.
while he was taking a shower i've put out the light and tried to sleep.
i started sleeping but felt someone next to me in my small bed saying "oops
sorry" while falling onto me, followed by "...i guess".
i kept my eyes closed and pretended i was still asleep.. john went to his
own bed after 5 minutes.
i kept this for myself, but now that i see how he treads jack from lambsbed
i felt it's time to say it out loud..
sorry john"

i hope Tovah and John are not the "noise" tomkat. (Tom Cruise & Katie Holmes)

Posted by Noisebloid at 4:33 PM No comments:

Posted by Noisebloid at 3:36 PM No comments:

On Sunday June 4 Zac Davis, one of the guitarist of Delaware, Ohio's Lambsbread lashes out at John Olson (Wolf Eyes, Graveyards) for outting him on his recent tour with Hair Police and Graveyards. Zac posted today:

its not fucking cool to confess something to someone
you trust in private and have him blab to the world
about it.... olson dude, i told you in front of no one
else (except shane and kathy, but theve known for
years and wouldnt blab to anyone), and its total
bullshit you ran your mouth all over 1/4 of the
country about this shit... its something i've been
struggled with since i've been young, and its hard
shit to deal with.... you wouldnt fucking understand
what its like to live your whole life lying, just
thinking how youre a liar at all times, and no one
knows the real you, not even yourself cause you cant
let it out... everytime you have a thought about
another man its like 'fuck, im not supposed to think
like this', beat yourself up some more, just hating
yourself cause you feel so right about being so
wrong... this is tough shit, and now the world knows,
thanks to JO (jerk off/john olson) and his shitty loud
mouth... i thought you were a good friend, but i guess
i was wrong... having to deal with this on my own was
bad enough, but now thats its out in public, i feel
like i cant even deal..... thanks to all the people
who emailed and expressed support for me, and to the
people who said "i hope this makes him more peaceful";
i am working on it but its hard... thanks to all my
friends who know and care

Jared Leto recently came out saying he was "gay as a goose," but took it back soon after. Will Zac?
Posted by Noisebloid at 2:25 PM 3 comments:

Noisebloid
THE FIRST AND ONLY NOISE TABLOID